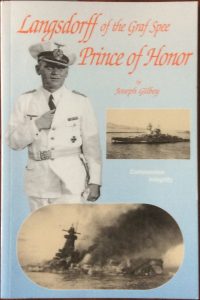 Gilbey book about Langsdorff, the Graf Spee Captain provide a different perspective on the fatal cruise of the pocket battleship. His portray of the Chivalry spirited Langsdorff help understand the final scuttling to avoid unnecessary bloodshed. The key information relevant to the military action are the weakness of the Arado 196 for high sea operations and the immaturity of the Diesel engine system which was susceptible to overheat in warm water. A large part of the book review the events in Montevideo, not only the diplomatic and political game but also the internal discussion of the senior officers on both the German and the British sides.

Regarding the military side of the events not as complete as the “The Price of Disobedience” from Eric J. Grove but an interesting and different account of the events and a unique inside on the humans involved in this tragedy.

The most current reference about the battle of the river Plate, in a lively style Eric Grove provide a detailed account of the battle and the background. He is incorporating many elements from E. Millington-Drake compilation including F.W. Rasenack account of the battle from the German side. The first part of the battle is very detailed and well analyzed (from 6:10 till 7:00) however the remaining of the action of the day is less detailed. For example little is said for the last shots exchanged between the DKM Graf Spee and HMS Achilles late in the afternoon at the limit of the Uruguayan territorial water.

2 mast detected on the horizon at 31000 m, Captain Langsdorff decide to engage. It was to his knowledge that British were having Cruisers sailing in the area but he was expecting a heavy cruiser and 2 destroyers.

Smoke sighted on the horizon at 323°, believed to be a commercial steamer.

Cruiser turning to port, Sailing toward sighting at 324°.

Smoke sighting identified as a German Pocket Battleship. Initially thought to be the DKM Admiral Scheer.

Note: The camouflage pattern on the DKM Graf Spee has been successful at confusing the observers from the HMS Exeter for a while.

Direct double hit on B turret, out of service. Splinters are showering the bridge above killing and wounding most of the crewman. After running out of control for a moment, the lower steering took back control on a 275° course. Exeter receive 2 more hits and several near misses. (Ex / 07)

Due to a threat of torpedo attack from the light cruisers, Captain Langsdorff order NNE course and change of target (to the leading light cruiser)

Fire starboard torpedoes, this was a local action from the torpedo team, the distance was misjudged to be 9000 yards (in the reality it was about 13000 yards).

Change of target, reengaging the Exeter with main fire control, while B turret still chasing the light cruisers with local fire control.

3 more direct hits, one on A turret, putting her out of action after 40 to 50 shots. The fire control table is out of service. Meanwhile the Graf Spee was hit twice by 8” from Exeter plus a near miss splintering the port side. 2 more hits from Graf Spee disabled ship communications forcing the remaining Y to use local fire control.(Ex /12) (Gs / 02)

The Exeter disengage under a smoke screen

The Fairey Seafox is catapulted.

A near miss splintered the DCT killing and wounding 70% of the DCT crew. This will disorganize the HMS Achilles returning fire for several minutes and confuse also the HMS Ajax fire control officer. (Ac / 01)

Communication with the Fairey Seafox is established, initially the plane radio was on the reconnaissance channel, while the HMS Ajax was on the spotting channel. Unfortunately HMS Achilles off pace shooting were used by the spotting plane to feed back the HMS Ajax. This created an incredible 4000 yd error (over 16 kyd, 25%). Order to close distance 60° to port.

Signal to speed up to 31 knots.

In order to get all guns on target the 2 light cruisers veer starboard by 35°.

The Graf Spee reengage the Exeter

Grove, 2000, “The Price of Disobedience” The Battle of the River Plate reconsidered 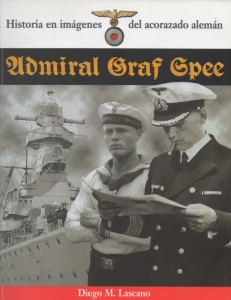 This book contain probably 400 to 500 pictures about the DKM Admiral Graf Spee, this the best photographic book about the pocket battleship. It is in incredible source of documentation for all the modelers willing to recreate the Admiral Graf Spee as she looked in 1939. It is in Spanish, as it has been published in Montevideo Uruguay. The copy I am reviewing is the third edition from 2006. A excellent reference for any study of the battle of the River Plate as many of the pictures and objects are coming from the German Sailors interned in South America or from the Uruguayan Press. One of the document is the “Trefferbild”, the graphic reporting the impacts from the Artillery Officer F.W. Rosenack. It shows 3 direct impacts from the HMS Exeter 8” and 18 impacts from the Ajax and Achilles 6” guns (page 102). Another little known fact is the 4 Chinese cleaners who were employed aboard the DKM Admiral Graf Spee, page 160 there are pictures of they repatriation to Germany.

In the fall of 1939 the second world war has already begun, however after the campaign of Poland (September) the axis and the allies were idle in what has been called the “phoney war”.

Most of the operations were naval, with Germany aggressively attacking the allies shipping lines. The German were having 3 different strategy:

Surface raiders, the “Panzerschiff” of pocket battleship, there were heavy cruisers fitted with diesel engines. At the outbreak of the war 3 were operational: the Deutschland, the Graf Spee and the Admiral Scheer.

The submarine fleet (U-Boot), which will be the most successful attempt to disrupt the British line of communication.

The DKM Graf Spee was already at sea when WWII broke out, the cruiser was operating with the help of the tanker Altmark raiding the South Atlantic and even South Indian Ocean. The allies did know one or multiple pocket battleships were operating in the South Atlantic and they created several group to chase them down. However their intelligence was limited. They did not know which PanzerShifts were at sea and how many they were.